This is the 10th time I've hosted SEORockstars. WOW! When I started SEORockstars all those years ago, I never intended it to be an annual event, but each year I would get talked into doing it again LOL.

And when I look back at all the speakers I've had on this stage in the last 10 years, I think the absolute best presentations have been from the guys that aren't at all well known.

In fact, these are the guys that don't normally speak at events, and rarely share in chat groups or forums, because they are somewhat shy.

But... they bring with them an unusual array of unknown strategies. These are the guys that have the winning SEO tricks and methods WE HAVEN'T HEARD ABOUT YET!

I mean, who wants to hear from the same corporate presenter with the same standard presentation you can get anywhere else, (because you know they deliver them over and over again.) The only thing worse than an overused set of slides, is when they have a pitch to sell you something after it!! YIKES!! Neither of which you will find here!

Of course we will still have some of the crowd pleasers that have rocked this stage in the past, but for the most part, you won't have heard of the speakers I'm bringing on stage this year... but you will want to know them after they finish speaking! LOL

I'm also focusing on the topics that you told me were important to you in the survey I took a couple months ago.

And since last years VIRTUAL event was such a success (just read the rave reviews below) this years event will also be virtual, but with a twist. It will be .

Instead of doing all the lever pulling in my office all by myself, I'm going to be doing all that live at the Tropicana in Las Vegas so for those of you that want to come and enjoy the company of your fellow SEO Professionals, you can! (It's the perfect place to network.) And for those speakers that come live, they will speak live in front of the audience. :-)

More details will become available, but for now, TICKETS for both are now available at EARLY BIRD PRICING for three days only this week, Tuesday, July 27 - Thursday, 9pm Pacific, July 29th. It's always 100% jam packed with SEO Knowledge Bombs. You will hear things you have never heard about before. The Speakers will bust SEO myths and Delivered SEO Strategies and Case Studies that you don't want to miss out on!

THIS IS THE 10th SEOROCKSTARS!!

And the only thing I can tell you is that you have GOT to test because I can honestly say that my buddies and I are on the "bleeding" edge of it AND have documented data that goes against everything that Google tells us! Crazy stuff! (and I know, right? Google not telling us the truth?) CRAZY, CRAZY STUFF! So we know..

to get the absolute latest SEO trends, SIA Tested Material and "Recipes" while sitting in the comfort of your own living room or office (or WITH US IN LAS VEGAS!)

This is being put on by the founder of the SEOIntelligence Agency, so you know you are going to get the LATEST scope on what is working and what is not.

And because of that, I chose Speakers whose SEO practices and the SEO information they give out correlate with our tests findings. We have done well over 600 tests so we know when someone is bullshitting or not.

For me, personally, some of the most important people I've met in this business have come from my SEORockstar events and I know, for a fact, I would not be where I am today without listening to those events. 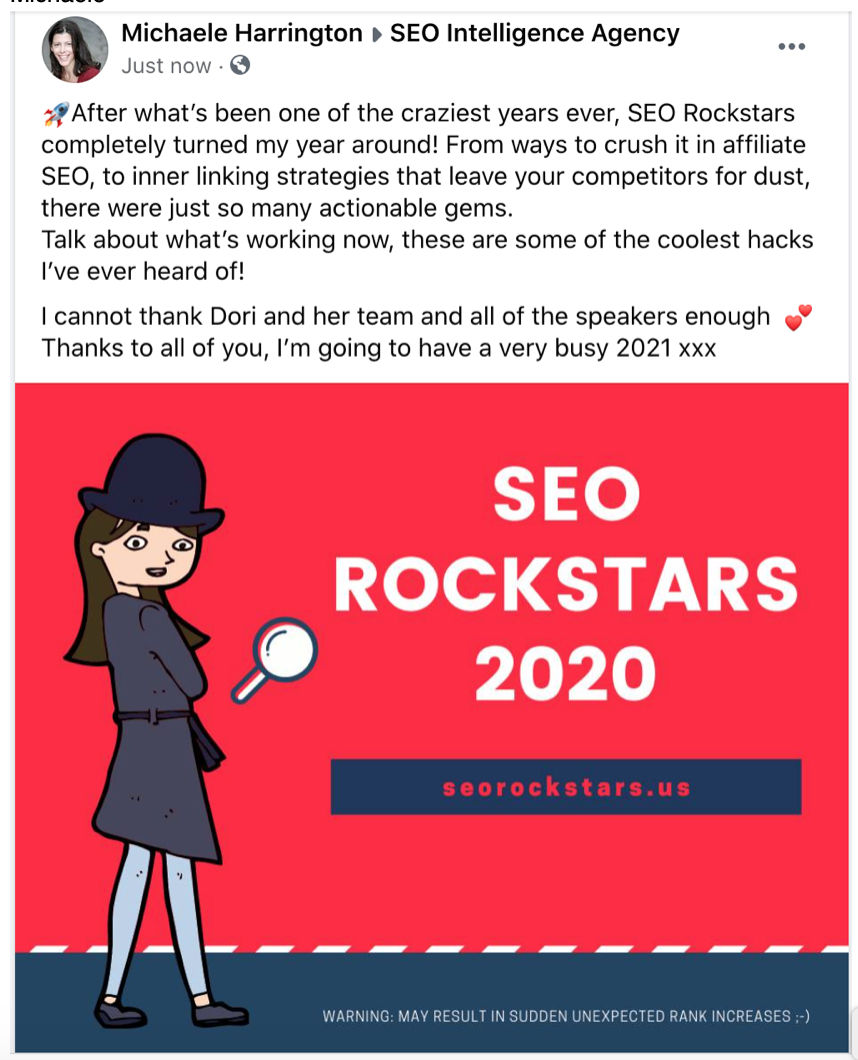 Each year I say I am not doing it again, as it is a lot of money and hard work to put on a purely PITCH-free event, but every single year I start hearing from people checking in to see when they can buy their early bird tickets and convincing me that I HAVE to do it!